In March, the surviving child of Ted Hughes and Sylvia Plath, painter and poet Frieda Hughes, sold at auction a number of her mother’s personal effects, to the tune of $551,862. The items included such mundane offerings as a yellow sundress, a costume jewelry necklace whose source is unknown, and of course, one of her mother’s signature plaid skirts from her days at Smith College. Hughes’ reasoning, as if she needed to provide one, was that being the last in her family (her brother Nicholas, an infant at the time of their mother’s suicide in 1963, committed suicide himself in 2009), she was fearful that the provenance of some unique items would be lost after her passing.

Of course, many do not live to provide the history of significant artifacts after their own death, and yet the information is passed on. And Frieda Hughes of all people has a right to seek some profit, after all her mother’s life and death have cost her. Little known is the fact that profits from the publication of Plath’s Collected Poems went to her and her brother, and not the so-called villain Ted Hughes. Yet, it doesn’t all sit right with me. A chair? A few bits of cloth? Sylvia Plath, like Marilyn Monroe, has transcended what fame she’d achieved in life to rise to a supernatural status straddling the literary and pop star worlds. The significance of these things because they belonged to Sylvia has multiplied exponentially, and their monetary value at auction clearly prove this.

I am not walking in Frieda Hughes’ sad, heavy shoes. I can’t imagine what she remembers of her mother, if anything. To carry that legacy into the art world, let alone life, must be an unimaginable burden. She paints, she writes, but always with the specter of the giants that bore her hovering overhead. But I can’t imagine either that many of us would part with such personal tokens. An exorcism of a kind? Frieda Hughes is herself a survivor, and that is something to be proud of in this realm. How she does it is her business. 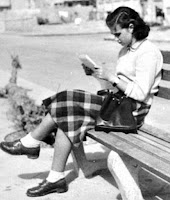