Recently two publications arrived in the mail that include my poems. Up The River is a brand-new publication of Albany Poets, and includes a good variety of work from around the region, as well as photos by local artists. Its debut was delayed by staff issues, but the quality of the first issue proves it was worth the wait. Perfect bound and glossy covered, I look forward to many more issues, and perhaps even submitting some photos from my days as a reporter in Newburgh. Even with the crappy little camera I used, I think I got a few nice shots that might be usable. 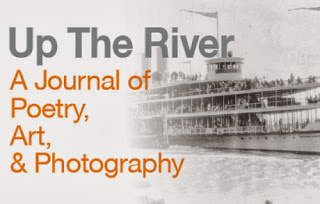 A Slant of Light is a new anthology published in September by Codhill Press, and features a cross- section of poems by Hudson Valley women. Previous anthologies include Riverine and Waterwrites, both featuring the work of Hudson Valley writers. A Slant... is a smart, compact volume, priced at $20.00. The price is a little high for my sensibilities, but I surely am out of touch when it comes to the cost of ink and paper in the real world. None of the poets included received any kind of payment for their work, but the exposure is hoped to expand interest in our poetry, and in Hudson Valley poets in general.

I am always disappointed when a long-awaited publication comes out, for a couple of strange reasons. Looking at my own work again after months, sometimes years, after I've submitted it, I'm always appalled. Often the poem has undergone several revisions since I last saw it in print, and seeing it in whatever foreign typeface the publishers choose fools me into seeing it at first as not my own, but someone else's. And, being the critical bitch that I am, I immediately start picking it apart. 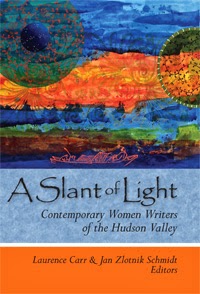 For many years I was not a fan of the revision process. I would just go on to another poem, sometimes with a similar subject, but often just abandoning the notion. I'm still not big on repeating myself thematically. The three or four poems I've come up with concerning 9/11 are an exception, and even then, each was inspired at a different time and under different circumstances, usually an anniversary. As I got older, and decided to begin applying what I'd learned in college to my real life writing, I began to revise, while still retaining hard copies of earlier drafts. Composing on computers makes this impossible, and it's one of the reasons I still write the first draft by hand, usually on yellow legal paper. 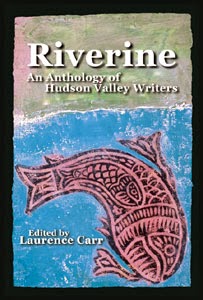 The other problem is something I'm not particularly proud of, but feel I should mention nonetheless. Because I am not the editor of these volumes, obviously I'm not the one who makes the final selections. I always see poems I would have preferred had been left out. Of course I have my favorite poets; everyone does. I also have my least-favorite poets. How editors make their final choices depends on a number of factors, only one of which is how good or accomplished the poet is. Sometimes I'm not so thrilled to be included in the same volume as some of my least favorite poets. But it is not my call. I get over it.

In fact, perhaps some of them are not thrilled to be in the same volume as I am.

And I often kick around the idea of starting my own publication, but then I remember how much work it involves. Then I shut up.
Posted by Cheryl A. Rice at 8:41 PM No comments: