Still Woman After All: Feminism in the Age of Proud Racism 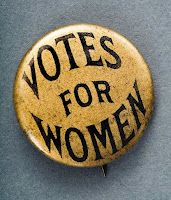 My 4th grade class, in lieu of a full-blown play, offered a selection of songs from Mary Poppins, probably in theaters on its first re-release in 1971. I had a wonderful light blue Granny Gown that I’d worn for Easter, and it fit perfectly with the time period. It even won me the task of handing out programs. The song that sticks most in my mind from that score is, “Sister Suffragette.” As with all Disney productions, it was a white-washed version of the actual struggle for women’s rights, leaving out the arrests and force feedings, but it did become an anthem of sorts for me. Even at nine, I was very aware of the inequities between the sexes. At the time, I believed I was in the majority in my community, and especially my middle-class school in the suburbs. But how far could a nine-year old get out into that community?

In 1974, “I Am Woman,” came out. It was the first single record I purchased, “Hear me roar,” sang out Helen Reddy, but I was anything but a roarer. Always a writer, my public speaking days were far off in the future. I began to use the prefix “Ms.” early on. That was my small roar. But I still had crushes on the most unlikely boys, still bought Ringo’s quirky remake, “You’re Sixteen,” not getting the creep factor then of a thirty-year old man lusting after teenagers. I  experimented with make-up, clothes when I could afford to, but I had no idea how to work with my early curves. I wore thick glasses which camouflaged a multitude of make-up sins, peacock greens, pearly purples muted behind the lenses. I did not know, and still don’t most days, what being a woman in American was supposed to look like. I still functioned under the illusion that we had more freedoms here. Now I’m not even sure what freedom means.

Ruth Bader Ginsberg grew up on another planet from mine. Brilliant, with an education that only multiplied her natural talents, she saw clearly what freedoms had been denied to women, and worked her whole career to change those restrictions. In 1971, when I was warbling on about suffragettes and kites in my small cafetorium, she was updating laws so that women like me could have their own credit cards, with their own names on them. When I left for college in 1980, it was brand-new territory for both me and my family, supportive yet trying to protect me with vague warnings about how it was still, “a man’s world.” I went on to explore this new world of college, and married young without much forethought. I managed to finish my degree in four years, but it would prove to be of no practical use on the job market. I graduated at 21 still without a driver’s license. I was in no way capable of managing a classroom.

I had a husband who berated me for ever wearing make-up, asking who I was, “getting dressed up for.” I kept my poems at work, after he’d ripped up some at our home. I got two black eyes for my troubles, and had even changed my name to his for a time, something I swore I wouldn’t do, but rationalized at the time that it made little difference. It made all the difference, I know now. I always used, “Ms.” but with my own identity all but erased, the prefix was powerless.

Ultimately I changed the course of my life, with help from a few key women. I took back my birth name, supported myself, moved and lived. I’ve got a rich history of friends, lovers, companions, jobs that would all make wonderful stories, if I live long enough to tell them. For the last twenty years, I have been settled with a man whose history nearly equals my own in drama and missteps. We are quiet observers for the most part. In this internet age, we travel via You Tube, saving ourselves the trouble of packing. We are adventurous in the kitchen, plagued no more by faux-vegan roommates or ramen budgets. We sleep well. He is my companion, but not my whole life. If he decided to go tomorrow, I would still have something here of my own.

I still strive for the equality of the sexes, and the races the genders. So much more has come to the surface. The Old Guard clings to the comforts of a black & white picture of an America that never really existed. Ozzie & Harriet met when his band needed a girl singer. Annette passed away after years of MS destroyed her once beautiful body. The President is a proud racist, and has followers empowered by his unchecked hate. But I still stand, shoulder to shoulder, with  others striving for equality, respect, opportunity, and security for all of us. Into the fray we go. I am still woman after all.