For many years, I was reluctant to revise my poems much. I don’t think it was that I thought they were perfect. At least I hope that wasn’t why. I just truly believed in the strength of the initial draft, the unconscious power of composition that occurred. I was more afraid of losing what I felt was that inherent power, even if the poem itself was flawed. I was more inclined to quickly move on to the next poem instead of spending time with any one piece. This could explain why my output was so much greater in the past.

I have been busy lately with longer, themed projects, like the Ziegfeld poems I’ve already talked about. I also spent a good portion of the year on a book concept concerning the women of Marx Brothers movies, a project that’s taken a back seat to the Ziegfeld material. I decided to follow my passions more directly, considering my very limited time to write.

I’ve also spent some time sending poems out, some new (despite everything, there are always new poems), but a good number of old ones. I’ve had some success there, but there’s a certain dishonesty I always feel in sending out work that isn’t representative of my current voice. Nevertheless, I aim for some consistency.

I pulled a few poems out from the last fifteen years and am trying to assemble them into some sort of manuscript, with the horrifically generic theme of “love.” Certainly, the romantic relationships in my life provided me with a good deal of material, and in turn, writing about them afforded me some cheap therapy that I benefit from to this day.

In order to make a uniform package, I’ve been revising each one. This is best done first thing in the morning, while I sip my stevia-sweetened coffee, and before the Dagwood-like rush to get out the door for work. Even poems I’d almost committed to memory (although that’s never a goal of mine) come up a decade later as desperately in need of order and streamlining. My biggest fault as a poet is becoming somewhat entranced by the sound of my own words, often to the detriment of logic. Sometimes the sun rises in the west, and sometimes a door becomes a jar.

The distance of years and deficit of crazy-making estrogen has given me clearer artistic vision. I am making these poems generally better, and most definitely a more cohesive unit. The truth will set your work free. I look forward to sending them out as a family to a few select publishers, or even doing another Flying Monkey Press publication. It’s all the same to me. The word’s the thing, and how it gets out there is a matter of chance.
Posted by Cheryl A. Rice at 10:13 AM No comments: 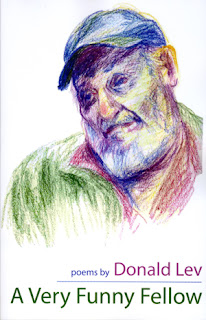 Donald Lev and I weren’t close, but we were familiar. To tell the truth, he and his late wife, Enid Dame, always intimidated me. They brought out the shy in me that I’ve worked hard to overcome. It certainly wasn’t because they were unapproachable. I’d seen them at readings around the Hudson Valley for years before I dared to speak to them, complementing them on their work. I probably first saw them at Bob Wright’s version of the Woodstock Poetry Society back in the late ‘90s or early ‘00s, maybe earlier.

They were anything but aloof. However, their work was so finely honed, each word carrying so much meaning, I could not believe that I’d have anything to talk about with writers of this caliber. I was wrong of course, yet, I never quite got over that sense of awe. I would eventually come to greet them both at readings, swallowing my fear. I even participated in a private poetry workshop with Enid, just three of us in the group, and I still have my notes from that. Midrashic themes were her specialty, and Lilith was her favorite character. When she died in 2003, Hudson Valley poetry was devastated by her loss. None, however, more so than Donald.

Donald was accomplished in his own right, yet seemed to hover a bit in Enid’s shadow, or as much of a shadow as poets can muster. His themes were more broad ranging than hers, and his work after her death reflects this especially. He was frequently introduced as one of the “stars” of the underground classic Putney Swope, and late in life, he wrote a series of poems based on the movies he saw at Upstate Films in Rhinebeck, a local art house cinema. He wrote about politics, religion, family, and Enid. He frequently read her work as often as his, keeping it alive for all of us, knowing poetry lives best when spoken aloud.

More recently, he lost the ability to drive and depended upon the kindness of other poets for transportation. He was often assisted up to the mic as our own Elder Statesman. His final illness was relatively brief, punctuated by a short rally in rehab where Donald pined for pen and paper. But in the end, the body was ready, and in truth, the spirit seems to have been ready for much longer. Nevertheless, we will miss that funny, gloomy fellow with the glass of red wine at the end of the bar. As much of a Brooklynite as he was, film “star”, literary hero, and member of a swiftly departing posse of ‘60s Lefties whose wisdom we sorely need about now, he became a part of this Hudson Valley. May his memory be a blessing, and a light.
Posted by Cheryl A. Rice at 9:07 AM 2 comments: