*Poem: They Shot Up My Old High School


They Shot Up My Old High School
-for Noah

They shot up my old high school,
Xmas, Hanukah decorations still lingering in the halls.
Down by the lockers, the setting for my first kiss,
a boy with big brown eyes
laid in his own blood for hours
until the shooter was captured.

In the cafeteria, where I myself
organized the Food Fight of the Century,
doors were barred shut,
long lunch tables piled against them,
students huddled behind the hot lunch counter,
texting thanks to their moms and dads
for everything they’d ever received
in their short lives.

The big gym teacher we laughed at, until he hit a ball
out to the back bleachers, used himself
as a shield, took a dozen bullets aimed at his kids,
died in the line of duty.

We all knew the shooter, familiar site in the
principal’s office, or smoking on the docks,
hanging at the pizza place in the plaza.
The easy toys he collected, posed with
like a movie star on Facebook, got no response.
The throat of his gun had to open for them to see
how serious, how important it all was.

The school nurse, out of band-aids and hope,
resigned her post. 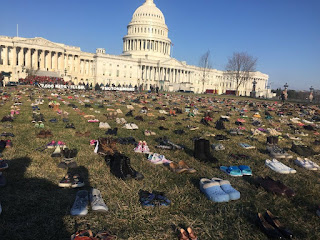