The Plan, In All Its Parts

Sometimes I think I’m not entirely committed to poetry, and sometimes I think that’s not such a bad thing. I’ve never been able to support myself with it. My first plan was to teach during the school year, and have my summers free for writing and lots of other fun stuff. I suspect this plan was inspired by the refuge I found in school, due to my being a quick learner and the equity and dependable routines I found there. When this plan faded, after graduating with a degree in Secondary Education and no passion to teach, and no desire to put time in teaching where life was hard and teachers were needed, I had to come up with another plan.

Retail paid the bills for quite a while, while I halfheartedly continued to pursue a teaching gig. My apartments got smaller, and my cars older. Finally, at my sister’s insistence, I applied for a job at Cosmodemonic Communications. For ten years, I worked as a Residential Sales & Service Rep, in a job that started out as “Residential Service & Sales.” The Powers That Be said that Sales WAS Service, and so the flip. I made more money there than I’m sure I ever will again, and earned it in sweat, stress and emotional abuse. Finally, I put in for a buy-out, but I was just a few months shy of what was required. I decided to resign anyway. I had another plan.

For several years, I pretended to work as a freelance journalist. I say “pretended,” because I am sure now that I lack the steel grit necessary for such work, and the attention span necessary to follow a story through over months, sometimes years, to its logical conclusion. Being able to construct a decent sentence is just the beginning. Afterwards I thought I had supported myself decently, but when I tracked the withdrawals from my 401K, I realized that I had barely made ends meet. Had my Beloved not been living with me (and endured my sudden resignation), it’s possible things would have been much, much tighter.

Several more jobs followed, and finally I landed at a seasonal retreat center about a half an hour from my home. The hours are regular and the pay is decent. My Beloved keeps more of his paycheck these days, and between the two of us, we can breathe a little easier. But, in every version of the plan, although I continued to write and read and publish, I never once thought that poetry, or even fiction of any length for that matter, would pay my bills. It’s the dream people my age grew up with, the leisurely college prof who published to avoid perish, or the Connecticut novelist who gazed out on the garden while waiting for the next golden phrase to alight.

Please note that most of these dreams featured male writers. Women writers were invariably portrayed as “spinsters” of one stripe or another, or bipolar comets like Sylvia Plath or Anne Sexton. None of the dreams included a well-organized kitchen, or being able to cook, clean and write with time to spare for relationships, relaxation or adventure. It does seem that, according to the biographies of many successful authors, their personal lives were as messy as their work was polished. Was this the price of brilliance?

The older I get (and I’ll be fifty-six in February), I lean more and more towards the peaceful home over the chaotic creative space. It is a daily juggle to get even a few words down. I think about the various projects I have in the works all the time. I contend that writers are writers even without a pen or keyboard at hand, that a part of the brain that operates subconsciously at sorting through words, phrases, linking concepts, shaping themes without our knowledge. But the older I get, the more important that peaceful nest becomes to me. I’m not willing to ignore my Beloved night after night, or take a month-long retreat to get a novel started, even if the alternative is a night in front of the TV watching YouTube.

And none of this is to say that poetry isn’t an important part of my life. I can’t imagine life without it, the readings, the people, or the work. It all goes back to that circle my brain spins in, alternately believing that it all matters, and that nothing matters, and that it all matters because nothing is more important than anything else. Dust in the wind, but stardust, baby. Beautiful stardust. 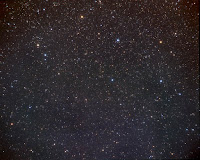