"Winning" Poems & How They Get That Way 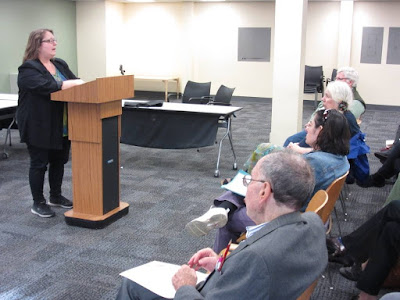 I attended a memorial for my friend Dan Schmidt last week. Among his many excellent qualities, Dan had a knack for focusing on the core essence of a person. He looked past the superficial details that might distract the rest of us, and connected directly with everyone's true self. He shared sincere joy, caring and grief with all he came into contact with, and remembered the details, too. I was of course stricken personally by his passing, but almost immediately realized the greater loss-- to all his friends, his birth family, and the community he adopted so many years ago as family.

And what does this have to do with poetry? Well, the day after the memorial, I attended the annual meeting of the Hudson Valley Writers Guild, and as part of the proceedings, the awards for the 2015 Poetry Contest were presented. As one of the judges, I felt an obligation to explain a bit about what I look for in a "winning" poem. "Winning," is a relative term, and on any given day I could have picked three other poems as winners. In the right frame of mind, I might even have challenged my fellow judge Howard Kogan to a duel to defend his choices. But, with the understanding that being a "winner" is a fleeting and subjective state, I offered a peek into the workings of my process.

Unlike my friend Dan, I am often distracted, by the presence of overused words in poetry-- "moon," "love," "soul," are just three of the words that cause me to be on guard. They are extremely powerful images, which is why they have been so frequently used. They can also indicate a lazy poet who chooses an image that s/he knows we are all familiar with instead of describing something completely, or with fresh language. If someone can write a poem with the word "rose," in it and make it sound new, more power to them. It's a tremendous goal that few can achieve these days.

What I look for in a strong poem isn't necessarily perfect craftsmanship. Forms are more of a pastime to me these days than a legitimate structure that enhances the effectiveness of the poem. Then there are all the grammatical bugaboos that can be distracting if you've been cursed with a solid education in the illogical details. These things can be gently corrected by an editor who can sense the gold within the straw.

What cannot be added is truth, honesty, passion. Poems are written for many reasons, and not always noble ones. Ego, revenge, and fear have often been the impetus for a poem. For me, the most powerful poems are written because the poet can do nothing but write. This compulsion is obvious in the work. It pulses and purrs with an unseen energy that is undeniable.

An added bonus is if the poet expresses themselves in unique language, fresh imagery. Being a bit on the lazy side myself, I find the easiest way to do this is to write the words down that come to you, not the words you've heard other poets use. Don't be afraid of writing in your own voice. It's the only one worth using, and really, the one the world wants to hear.

If you're wondering, no, I haven't written a poem about Dan yet. A few images have been kicking around the back of my brain. When I do (and let's face it, I will), it may not be the best poem ever written. But my intentions will be sincere. I owe Dan at least that much, and so much more.