Nothing Left to Say: Silence in the Communication Age

I have always been an advocate of writing as therapy, or at least self-help. I maintain that sorting thoughts and feelings out on paper (or a screen, if you’re a youngster) helps to clarify and organize. I can trace my history of romance through the years by looking through poems and have somehow reached the age where I can no longer recall the subject of some of them (whew!). This method of sorting doesn’t necessarily produce good poems, but it can help to create a functional level of sanity.

Lately though, I seem to have less and less need to express my confusion through poetry. I won’t claim a more solid sanity. As we age, the worries do change, and never entirely leave us. Grief becomes an everyday companion, and drops in at the most inappropriate times. The run-up to the holidays this winter was particularly stressful for me, and for no particular reason. We spent a quiet day at home, watching TV and making Duck A La Orange, ultimately following Julia Child’s recipe after viewing a thousand YouTube videos. My Beloved’s children are grown, and having been raised without Christmas for the most part have no great expectations. My niece and nephews are off on their own lives, too. The two little ones in our lives are far, and not yet of the age of anticipation.

Yet I found myself mourning Christmases of yore, the ones that seem to glow in MGM Technicolor perfection. I think I know now what my parents were thinking as they went through the Santa Claus motions each year, missing those no longer with us, the slings and arrows too of their own childhoods. We laughed, though. We laughed a lot, and I try to keep laughing, despite all the changes. Those Christmases were not perfect, but they were mine, and they are gone forever.

My house is in chaos lately. I have recommitted to completing the million little craft projects I’ve begun before starting any new ones. In one corner are the components of a new pill box fashioned from an Altoids container, in another a recently started baby blanket for an infant due in February. There is always the tablecloth my great-grandmother Harriet made long ago, carefully folded and zipped into a plastic cover. It needs repair, and I’ve rolled that project around my brain for years now. I’ve finally decided on a plan of attack, and hope to have this soft white monkey gone from my list of obligations soon.

Poems still happen. Even when I think I might not be writing at all, my files indicate otherwise. I just finished rereading the definitive bio of Anna Held, and started one about Lillian Lorraine, her successor. Work goes on in my head about all the long-term projects. I haven’t touched the memoir in months. I am very anxious to shape that material into something respectable. On the other hand, I’m not too keen on leaping into the mess that was my life in the ‘80s. A sort of aftershock takes hold, and I always need to step back and breath after a while.

But the desire to express my feelings about the here and now is dormant as the tiger lilies in our yard. I’ve even made conscious decisions about avoiding subjects in poems, something I’ve rarely done before. I fear that the rise of that editorial voice is a bad sign, artistically. Yet I have neither the inclination or ego to pursue a well-structured poetry career at this point. If I passed away tomorrow, there’s enough of me out there to float around the inter-ethers for a few years. Maybe I’m gathering up steam for another grand project I’ve yet to conceive. In any case, winter’s the time for this kind of stuff. Crochet, craft, cooking have all taken precedence. The pen will be there if I need it. 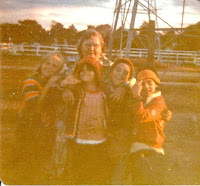