I received in the mail yesterday morning a copy of a new festschrift, or collection of writings dedicated to a scholar of note. For Enid With Love is for Enid Dame, and saying I'm pleased and honored to be included doesn't begin to express my appreciation. Enid Dame and Donald Lev were the founders of Home Planet News, an old-style tabloid that features poetry, short stories and essays. Their politics is apparent in Donald's notes at the beginning of each issue, but they never dominate or infringe on the writings therein. Since 1979 Home Planet News has appeared sporadically throughout New York City and the Hudson Valley, and since Enid's death in 2003, Donald has continued on alone, supported by a faithful group of editors and supporters.

Also included in the festscrift (a word I became familiar with during the time I worked for Norman Levine at Editions, his eclectic used and rare book business based in Boiceville, NY) are such heavyweights as Ed Sanders, Bob Holman and Janine Pomme Vega. Hudson Valley poets include Larry Carr and Matt Spireng, among others. I was familiar with Enid and Donald from hearing them at readings, sporadic chats afterwards, and of course, their publication. I was thoroughly intimidated by both of them, not because they were overbearing or arrogant people, but because they were so thoroughly accomplished in their art. Their average Bohemian style, Enid in her Mexican embroidered dresses, Donald in his suspenders and scuffed totes full of newspapers and chapbooks, belied their finely crafted poetry.

Ultimately, I and a couple other friends hired Enid for a private poetry workshop, not long before she died, as it turned out. Her insight into the art of the midrashic poem, a concept she borrowed from Jewish intellectuals and made her own, was also a peek into her own creative process. I should have recorded it, but only have my usual illegible notes to remember it by. Who knew it would be my last chance to work so intimately with Enid? I regret allowing my shyness to rob me of years of her acquaintance that could have been more productive, for me at least.

But, no one can take her poems away, and For Enid With Love includes a teasing sample of her work. I have only started it, after having of course checked the spelling in my own contribution (looks OK), but I look forward to reading more, seeing what I miss, mourning with the others that this bright talent, warm soul departed much, much too early. For Enid With Love can be purchased directly from the publisher, NYQ Books, at www.nyqbooks.org for $16.95.

Meanwhile, Donald struggles financially in these lean times to produce every issue of Home Planet News. This accounts for its even more sporadic appearances throughout the course of the year. A fundraiser is coming up in November at the Bohemian Book Bin in Kingston (http://www.bohemianbookbin.com/), but don't feel compelled to wait that long to subscribe, or contribute. 3 issues are $12, and a special sustaining subscription is just $50 for life. Send your checks to: Home Planet News, PO Box 455, High Falls, NY 12440. Or, catch Donald at one of the many Hudson Valley readings he attends every month. His presence continues to enlighten and delight us, as does Enid's memory. 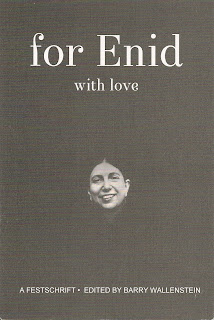