In real life, I am frugal beyond belief. I wash out plastic baggies, count the sheets when I unroll TP for use, and save the rubber bands from broccoli in a kitchen drawer for heaven knows what. So, when I saw an offer to rent studio space during an Artists’ Open House here in Kingston, NY for only $50 for the weekend, I knew immediately that I could figure out something to do with it. And there I was, peddling my own wares and pushing the boundaries of the poetic life once again.

As it turned out, I had an enormous space all to myself. My velvet-draped card table appeared to be adrift in a sea of rough factory flooring and whitewashed ductwork. An office desk nearby was co-opted for an activity center. I offered pads and pens, as well as a small basket of writing prompts glued on the back of paper “buttons,” since we were, after all , in the old Shirt Factory. I had planned to hang my Vistaprint banner on the wall from a clothesline I purchased from the Dollar Store, but weight and logistics forced me to clip it to the front of my velvet table covering. I laid out my stock of chapbooks for sale, booklets promoting my RANDOM WRITING workshops, and opened the door.

I was at the end of a quiet corridor on the main floor, so I played nondescript jazz on my cell phone to attract some attention. Despite being the only kid on the block, a few brave souls did poke their heads in. I calmed their fears, considering I was probably the only poet in captivity they’d encountered. Some took a booklet or a business card. One cartoonist left a writing sample, inspired by a prompt. One little girl took a few buttons. I also made a few new friends who were actually in the Word Game, too.

At last I had a chance to chat with Bruce McPherson of the fine local publishing endeavor McPherson & Company. I know he was one of the many I tossed a resume’ at years ago, unclear about what I could offer but hoping my degree, my writing experience would secure a place for me in his employ. He had thankfully forgotten the incident, and I was happy to make his acquaintance this weekend, on more solid ground.

I also learned about an April celebration of women artists at the Lace Mill, another repurposed factory building in Kingston. Coincidentally, my new friend said they were looking for more performers and writers. Although I long ago gave up any ambitions towards becoming a so-called “performance poet,” I still try to give listeners their money’s worth when they come to a reading. I will look into this opportunity shortly.

I also had many artist and poet friends stop by. At one point, the vast space was full, perhaps not of bodies, but spirit, support, and a mutual affection for this wonderful thing we shared, the Artist’s Life. That Life doesn’t always (or even frequently) include monetary security, or paparazzi stalking one from Starbucks to Starbucks, but it does mean a family of sorts. We share the same insatiable craving to be heard, even if only by each other. I hear, and I share. It is good.

For the eight hours I was there, I sold enough books to cover my fee, and had a chance to present myself as a serious artist in an environment of peers. Granted, being alone, I did not have a chance to venture to the fourth floor to see what the visual artists were into, but a few of them did come down. It gave me a chance to organize myself and my work in such a way that I might have a better sense of where I might want to go from here. And, for just a few hours, I could pretend that poetry was, in fact, my main occupation, both in and outside of my head. No small feat. 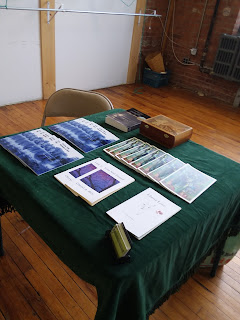