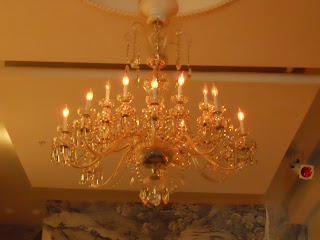 A few months ago, I was invited to be one of the featured readers at the monthly NYQuarterly poetry series, currently held at the Bowery Poetry Club in NYC. Knowing how Hudson Valley winters can be, I postponed until the warmer months. Thank goodness! Making our way to the train station would have been harder than actually hiking to New York on foot! As it turned out, May 10 was an unusually balmy day, and for once I dressed accordingly in a cotton skirt and sandals. When we walked into the Club, recently redecorated after being closed for a time, I felt underdressed.

The atmosphere is that of a swanky nightclub. Piano ballads flooded the air, and my Handler and I relaxed on a blue velvet sofa up front, opposite the bar. I had been hesitant about the reading for the last couple of weeks, mainly because I felt the PR machine hadn’t been set on stun, as is my own habit. I have few contacts in the City, and even fewer who might be convinced to sit through a poetry reading, even for my sake. A last minute email blast did little to reassure me, and neither did my last minute realization that I’d be reading on Mother’s Day. Even the most devout poetry worshippers are difficult to pry from their moms on her day. I remembered that the reading was, however, an open mic, which usually has a built-in audience if only of other readings. I made the effort to let go of expectations, and tried to be open to what the experience would bring.

My fellow readers, Michael Homolka, Naomi Replansky, and  Bill Zavatsky, trickled in one by one, with host Doug Treem following close behind. His warm greeting and good humor eased any lingering doubts. He also made quickly clear that he’d done his homework about each reader, and quizzed me immediately about the Sylvia Plath Bake-Off and what I might have been thinking! I volunteered to read first, because I don’t have a problem with reading first, second, third or twenty-ninth but many poets do, and perhaps I returned the favor of his hello. 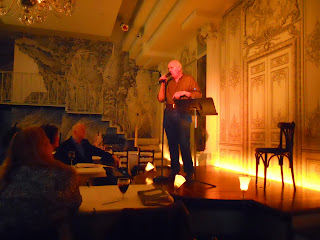 The other features were accomplished, and an interesting spread that demonstrated how we live and incorporate poetry into our lives. I was the least academically inclined of the bunch, but I like it that way. I don’t know how others perceive me, but I like to fancy myself as able to run in that pack from time to time, though I’m more comfortable in the pubs and galleries. The audience, about twenty-five in number, was attentive and gracious. I was even more impressed that this was the case when I realized that there would be, in fact, no open mic. I even sold two chapbooks. That basically covered the cost of two coffees and a crepe in Grand Central. Of course, if it had been about the money, I’d have quit long ago. 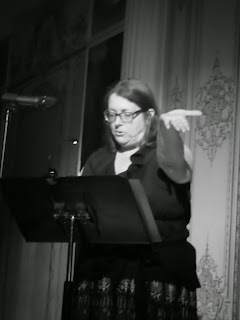 They’ll be no quitting, much as I whine and complain. I like to read. I’m pretty good at it. My Handler thought I was a little off yesterday, and that was probably the case. I am consciously trying to expand my circles, read and listen to poetry in different spaces, in different voices. It’s always intriguing, and yet there’s a sameness to our perspective that makes me feel at home no matter how many crystal chandeliers hang over my head (did I mention the chandeliers?)

We were advised by Doug to shake the hand of Bill, who in turn had shaken the hand of Pablo Neruda as a youngster. Neruda, many years before that, had had the great fortune to shake the hand of Walt Whitman, one of my favorite Long Islanders. I didn’t even have to leave my chair. Bill came to me, and gave me the give of that handshake. Feel free to shake my hand when you see me. It’s too much for me to keep to myself.
Posted by Cheryl A. Rice at 12:50 PM No comments: